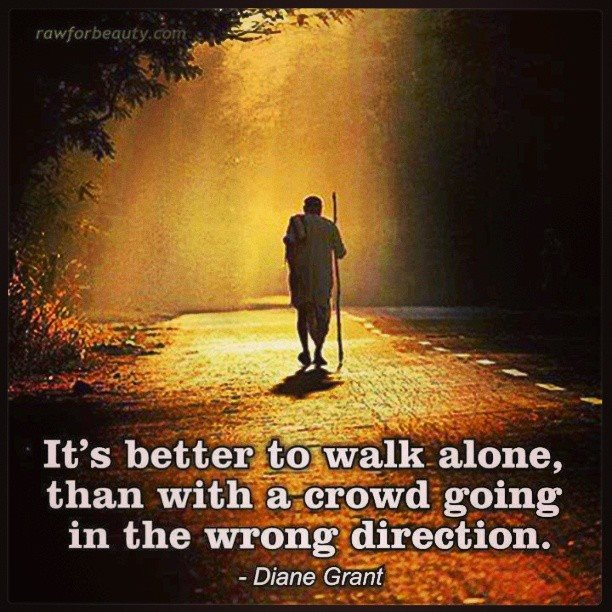 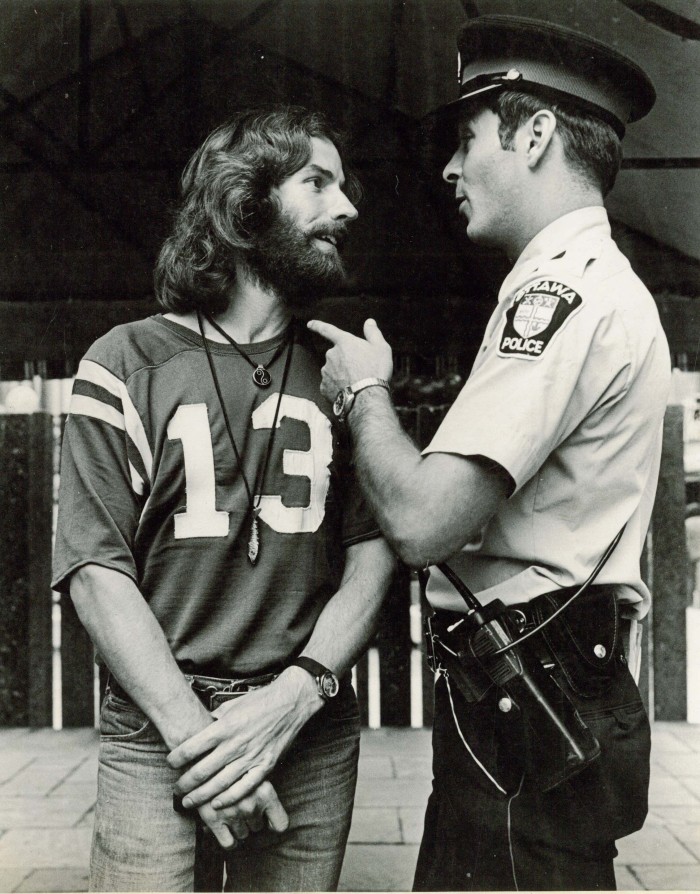 In this letter to the Ottawa Citizen, the writer uses a Bible verse from the

great Prophet Isaiah in chapter 42:2 to say my Public speaking is contrary to the Word of God. He objected to the header ‘Christ Didn’t Whisper’ in a letter to the editor by an earlier writer defending my Public speaking. That letter can be seen below.

Looking up that scripture to see it in context, in the very same chapter, at Isaiah 42:13 it reads,

The LORD shall go forth as a mighty man, he shall stir up jealousy like a man of war: he shall cry, yea, roar; he shall prevail against his enemies. 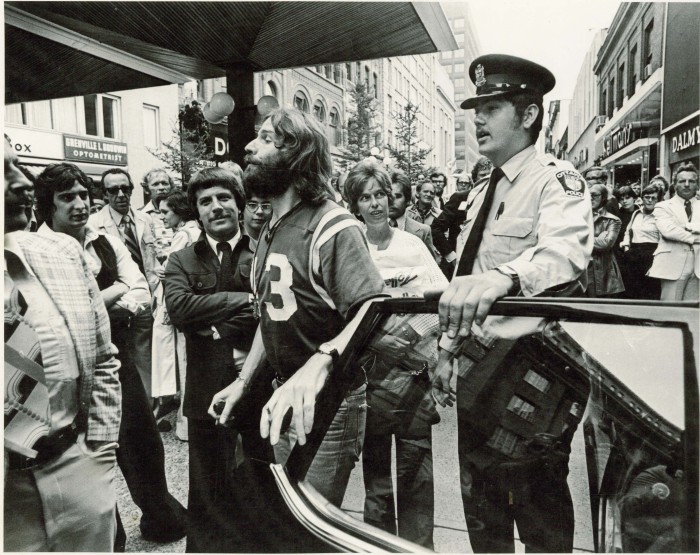 The header to this story would have attracted readers so it is good.  I also like the ad placed underneath it about being a winner with the Christ of Christmas. I also like the thought of “I” ARKS as in Noah’s ARK in the Business sign in the background. As Mother Teresa realized, You see, in the final analysis, it is between you and God; it was never between you and them anyway.

The story records I did say,”I’m a nut,” but like lazy news media tends to do, it was taken out of context:

“some of you may think ‘I’m a nut.’ Have you never read these words in the Bible? I went down into the garden of nuts to see the fruits of the valley, and to see whether the vine flourished, and the pomegranates budded.  The flowers appear on the earth; the time of the singing of birds is come, and the voice of the turtle is heard in our land.”

The turtle has no voice like most people when it comes to the weightier matters affecting us all. This was a parable/prophecy saying the world is going nuts. Most people would agree the Vision has Generally been proven True after all these years.

This is the same Police Officer assigned to stopping me from exercising my Democratic right to Freedom of Speech in the image above it. After these incidents, I saw this Officer several times on the Beat and always acknowledged him with a cheerful, respectful greeting, but never stopped to talk with him.

Two years passed by and finally the Time arrived when our paths crossed by chance and I stopped to engage him in conversation. I was surprised when he told me he is indebted and grateful to me. He said he was only doing his job as he had to do. He said he realized the people were with me and I could have made him the scapegoat focusing everything on him and I didn’t do that. That was never my style with him or anybody anyway.

For we wrestle not against flesh and blood, but against principalities, against powers, against the rulers of the darkness of this world, against spiritual wickedness in high places.

What I find interesting to note, is how ancient Jewish Biblical History is repeating itself these Days in a new phase.

The Jewish Bible refers to the Prophet Micaiah for only one Day, one scene and situation of his life.

About 3000 years ago, the kings of Israel and Judah held a Summit meeting to discuss going to War with Syria over the Golan Heights.

The king of Israel gathered the prophets of Israel, 400 of them, to tell the kings if God was with them in the War?
They were unanimous, with no dissent at all, telling the king, “Ascend, and the Lord will deliver [it] into the hands of the king.”

I can only think king Jehoshaphat of Judah was somewhat skeptical of the unanimity, and asked the king of Israel if these were ALL the Prophets in Israel?
The king said, ‘there is 1 more, but I hate him. He never says anything good about me.’

Guards were sent to get Micaiah and told him all the other Prophets were unanimous. God would give the king a win, so don’t rock the boat, and go along with the others. He did in a way saying, “Go up and triumph, and MAY the Lord deliver it into the king’s hand.”

While the Bible has no mention of any other Time, the king of Israel said to Micaiah, “How many times must I adjure you that you shall not speak to me but truth in the name of the Lord?”

Micaiah, in ‘speaking truth to power’ said, I saw all the Israelites scattered over the mountains like sheep who have no shepherd. And the Lord said, ‘These have no master. Let them return each one to his house in peace.’ ”

It got worse for the king of Israel as Micaiah continued,
“Therefore, listen to the word of the Lord. I saw the Lord seated on His throne, and all the host of heaven were standing by Him on His right and on His left.
And the Lord said, ‘Who will entice Ahab so that he will go up and fall in Ramoth-Gilead?’ One said in this manner and another one said in that manner.
And a certain spirit came forth and stood before the Lord and said, ‘I will entice him,’ and the Lord said to him ‘How?’

Naturally, 1 of the 400 other Prophets of Israel gave Micaiah a shot to the head.

The king ignored Micaiah and decided to go to War against Syria over the Golan. The king ordered Micaiah be sent to prison on minimal rations of bread and water, until he returns in Peace.

Micaiah said to the king: “If you will return in peace, the Lord did not speak to me.” And he said, “All the nations listen.”

The king of Israel divested of his royal robes and chariot, and went to War dressed as an ordinary soldier, and was killed.

The Bible doesn’t say what happened to Micaiah.

And the Nations are not listening. 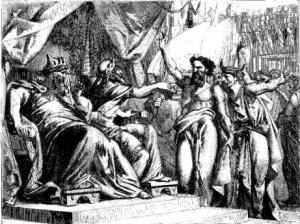 I don’t think there are many Journalists or advisors to the kings of the earth having that kind of inner strength in speaking ‘Truth to Power’ these days.

In my view, God is not with Israel in their plan to start WWIII/Armageddon with a 1st strike on Iran.

There is a graphic video of the possible Global unintended consequence once Israel starts that war here.

There is a moral and premonition for Today to this ancient story. The seeds of Democracy were planted in that episode in Israel´s history. A fundamental principle of Democracy is, if the whole country disagrees with any one individual, that individual has the protected right to speak.

I attempted to do just that in Canada´s Capital, Ottawa, in 1977. Having

no money to organize, advertise or rent a hall, I stood up as a free man on the Sparks Street Mall, the first street after Parliament Hill, and began to speak about God and the Global system of Babylon. People of their own free will started to gather, and eventually were backing up to the next block.

The Police came and stopped my speech. Arresting me for ¨shouting, causing a disturbance,¨ I was locked up in maximum security, solitary confinement for 5 days before appearing in front of a Judge, when I was remanded for trial.

At trial, I had 8 charges because I stood up on the Sparks Street Mall again and again, as was my right, and every time the people stopped to listen. The Police stopped my speech every time.

I was convicted, given a one day suspended sentence, and placed on a probation for one year with only one condition that was so unusual, there was no standard box to check off. Typed in at the bottom of the form were these explicit words:

¨Not to attend on the Sparks Street Mall, or any other street in Ottawa for the purpose of SPEAKING or shouting.¨

I made three more attempts to express my views of God and this world, and was sent to jail for 30 days.

The Ottawa Citizen and other newspapers who chronicled every incident, marking it in time, projected a positive image and reporting the crowds demanded the Police allow me to speak.

I was mindful and grateful in the knowledge other regimes in this world could have just made me disappear if I did the same thing over there.

On getting out of jail I called the Ottawa Citizen saying, You projected a positive image. Now would you like to talk about the substance? They said, You´re not news any more. That´s the Free Press for ya! What can a solitary person do?

That was long before the Patriot Act.

There is a line in the Bible that says, ¨As it is with the prophet, so it shall be with the people.¨

5 thoughts on “SEEDS OF DEMOCRACY”