The last post to this Blog August 13 was on the Biblical Jonah in the Whale story, in light of ISIS the Islamic militants, the newest, greatest threat to humanity, blowing up the Islamic Mosque reportedly containing the Tomb of Jonah in Nineveh, Iraq. Jonah is revered by Jews, Christians & Islam. What is the significance of this ‘Sign of OUR Times?’

Naturally, perhaps more than any other, I would find it interesting to see this article appear in the Israeli newspaper Haaretz two months later, on October 7.

This is a re-post of the Haaretz Story 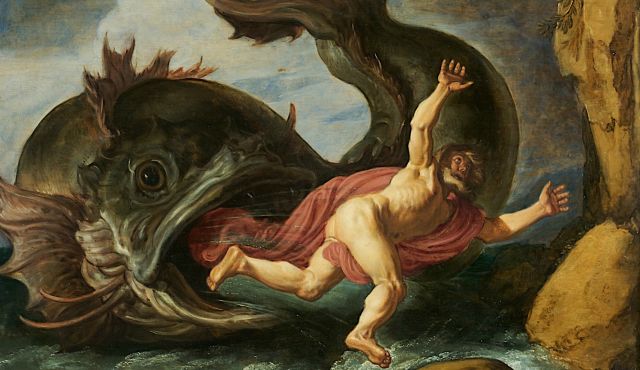 Yom Kippur, the Day of Repentance, which fell this week, makes the Book of Jonah its liturgical centerpiece. For many, Jews and non-Jews alike, the connection of this text to repentance is all too clear. Perhaps the most famous sermon on the subject, certainly the most paradigmatic, is that of Father Mapple in Moby Dick, whom Ishmael hears just before he first sets sail:

All the things that God would have us do are hard for us to do – remember that – and hence, he oftener commands us than endeavors to persuade. And if we obey God, we must disobey ourselves; and it is in this disobeying ourselves, wherein the hardness of obeying God consists. With this sin of disobedience in him, Jonah still further flouts at God, by seeking to flee from Him. He thinks that a ship made by men, will carry him into countries where God does not reign but only the Captains of this earth. He skulks about the wharves of Joppa, and seeks a ship that’s bound for Tarshish.

Father Mapple, en passant, ferrets out of the Book of Jonah Jonah’s own idea of what a Hebrew is, someone who knows God’s power, and who knows better than to expect mercy when sins are great:

‘I am a Hebrew,’ he cries- and then- ‘I fear the Lord the God of Heaven who has made the sea and the dry land!’ Fear him, O Jonah? Aye, well might you fear the Lord God then!

We know what happens next. Jonah, admitting that the roiling seas are his fault, is tossed overboard by terrified shipmates. Then Mapple reaches his climax:

He goes down in the whirling heart of such a masterless commotion that he scarce heeds the moment when he drops seething into the yawning jaws awaiting him; and the whale shoots-to all his ivory teeth, like so many white bolts, upon his prison.

Jonah calls out to the Almighty. The fish pukes him up. Mapple says:

And Jonah, bruised and beaten- his ears, like two sea-shells, still multitudinously murmuring of the ocean- Jonah did the Almighty’s bidding. And what was that, shipmates? To preach the Truth to the face of Falsehood! That was it!

That was it. The challenge is to preach the truth in the face of falsehood. To brave the fight, and scoffers be damned. The world is made up of people who know the truth and people who either don’t know it or resist it. And the way to get people to be good, or afraid to be bad – and what’s the difference? – is through a kind of permanent regime of deterrence: We warn like Father Mapple, warn like Jonah eventually did. And we will preach a force that will find you anywhere, idiot. All the things that God would have us do are hard for us to do.

I thought of Father Mapple watching Benjamin Netanyahu explaining the struggle against militant Islam from the UN’s podium this past week. “To protect the peace and security of the world, we must remove this cancer before it’s too late,” he said. As with Father Mapple, Netanyahu warned of two kinds of people, the peace-loving and the bloody-minded. Israeli leaders must therefore do something hard but inescapable: Bring a message of deterrence, preach the truth in the face of falsehood, bomb if you have to and the New York Times be damned. “Israel is fighting a fanaticism today that your countries may be forced to fight tomorrow.”

I felt, I confess, sadly embarrassed for Netanyahu, our sanctimonious impresario of settlements, the way I imagined Ishmael feeling a little ashamed for Mapple, whose righteousness so clearly cut against his grain. Jews have had Yom Kippur longer than we’ve had the Likud. Was this really what the Book of Jonah taught? Why, really, did Jonah run?

Actually, the people of Nineveh are not the real villains. They are not very bad: One perfunctory warning from the prophet and even the cattle are put into sack-cloth. No, it is Jonah the book is warning us about, that we should not be like him: Angry, hungry for the punishment of crime, incapable of managing ambiguity. Jonah finally admits to us, or God, the real reason why he ran, but only after God forgives Nineveh:

I pray You, O LORD, was not this my saying, when I was yet in my own country? Therefore I fled beforehand unto Tarshish; for I knew that You are a gracious God, and compassionate, long-suffering, and abundant in mercy, and repent of the evil.

Therefore now, O LORD, take, I beseech You, my life from me; for it is better for me to die than to live.’

And the LORD said: ‘Are you greatly angry?’

Jonah’s melancholy, you see, has nothing to do with fearing God’s mission. It has everything to do with fearing God’s compassion. You sort of get the feeling that Jonah builds the booth to look out onto the city in the forlorn hope that God would incinerate the sons of bitches after all. He obviously feels more comfortable far away from the people he was notionally saving—that he cares about humanity more than mere humans. He would rather die than live with the confusions brought into the world by forgiveness.

Jonah, in other words, is hardly the hero in the book. God is. What’s missing from Netanyahu’s speech, and Father Mapple’s sermon is a kind of critical self-consciousness, which is the real lesson of God’s actions. The heart to be transformed is not in Nineveh—it is Jonah’s: God acts as a kind of cosmic therapist. God then sends a plant; Jonah falls in love with it—or at least with the shade it provides. God causes the plant to wither—not to prove his power some more, but because he realizes that, as with a numbed child, you can teach compassion only step by step. God asks Jonah if he is aggrieved by the death of the plant. Again, Jonah is so aggrieved he says he would rather die than live. God asks, finally talking past Jonah’s neurosis, so then how am I to feel about the people of Nineveh, who “do not know their right hand from their left”?

Terrorism is not tolerable – that’s true. Members of my own family have been its victims. Still, the God of Jonah teaches, first and foremost, the renunciation of Manichean visions, this notion that life presents us with heroic struggles against evil forces—the idea that goodness rests merely, or even mainly, on the terrible power of good forces to intimidate the bad. How would God help Israel’s prime minister to see, to paraphrase the novelist David Grossman, the little Hamas in oneself? I suspect the future of what Jews mean by Jews will depend very much on the answers we provide to these questions.

I have spent a good deal of time with another prime minister this past year, nobody’s hero now, who himself launched two wars against “the missiles.” He can speak for himself, but my impression of Ehud Olmert is that he is not at all certain in retrospect that Israelis saw enough of what Jonah’s God would have wanted us to. When I asked him about his proudest moment of statesmanship, he told me this:

Olmert had sat in on meetings in which Ariel Sharon had treated Abbas as the representative of a defeated, insurgent enemy that needed to be intimidated. This often made Olmert cringe. So when he assumed office, and tried to set appointments with Abbas, he was not surprised that Abbas kept putting him off, determined, Olmert surmised, to avoid more humiliation. Finally, they set an appointment for a Thursday evening, and again Abbas cancelled at the last minute. So Olmert got him on the phone and said: “I understand why you might want to insult me, but why insult my wife?” Abbas was taken aback and said he did not understand. Olmert said: “When Aliza found that you would be coming, she spent the last 24 hours preparing your favorite dishes for dinner. What shall I tell her now?” Abbas came, eventually met with Olmert 36 times, and the two came closer to a comprehensive agreement than any previous leaders.

This is not the kind of approach to truth and power Father Mapple, or Netanyahu, would have respected. But I like to think that the Book of Jonah’s God would have been relieved.

Then certain of the scribes and of the Pharisees answered, saying, Master, we would see a sign from you.
But he answered and said unto them, An evil and adulterous generation seeks after a sign; and there shall no sign be given to it, but the sign of the prophet Jonas:
For as Jonas was three days and three nights in the whale’s belly; so shall the Son of man be three days and three nights in the heart of the earth.

1000 years to God is the same as a Day the Bible records. By that Time frame, we are at the 3rd Day when the Spirit of Christ will resurrect in the hearts of the People once again.