TODAY is another 40th Anniversary Day for me. On ALL SOULS DAY, November 2, 1976, THE KANSAS CITY TIMES published the 2nd of two reports on my visit to the City in The Spirit of ’76. 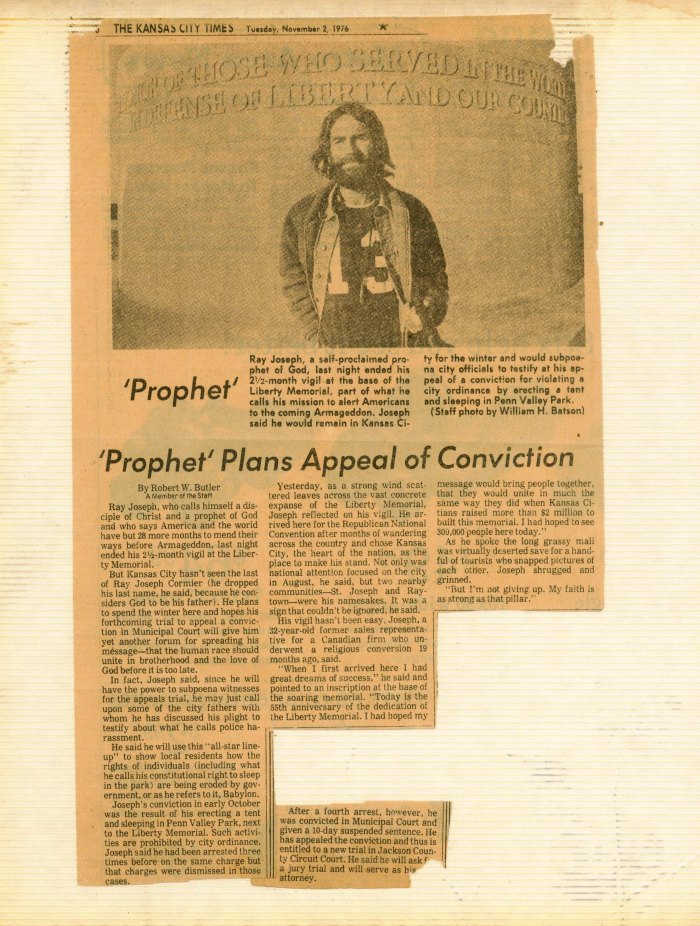 The writer of this 2nd record is not the same Reporter who wrote ‘Prophet Chooses Park For Vigil‘ on September 13 with the image wearing the #13 jersey. This Reporter was more careless in what he wrote.

I did describe myself as a Disciple of Christ, and told the Reporter of the unusual circumstance of a Secret Service Agent wanting to question me, and instead of doing that in some anteroom, led me behind all the SS check points, and questioned me standing at the Podium of The President of The United States on a restricted Mezzanine. Having the image this picture shows, with the 3 TV Networks broadcasting live, and witnessed by all the sardine packed Republicans in the Lobby of The Crown Centre Hotel below looking up to that spot expecting The President to be standing there, it was a Revolutionary image in the Spirit of ’76.

Being led there was an unexpected surprise, but it was an even greater surprise when the Secret Service Agent standing Face to Face with me, laid these exact words on my ears, “Are you Jesus Christ?”

Having no illusions about that then or now, in a nanosecond answered, “No!” The next question was, “Who are you then, a Prophet?” I never entertained the thought before unexpectedly finding myself in those unusual circumstances, and was not as immediate in answering that question.

I was familiar with Fake News 42 years ago, long before Trump mentioned it. I did not say ‘Armageddon was going to happen in 30 months.’

What I did say is recorded in the September 13 report, “There are 30 months before the FATE of the World will be SEALED with EITHER Destruction OR The Universal Brotherhood of Man,” he said. The 30 month figure stems from another Biblical prophecy, he said, concerning a Treaty with Israel” This does not say Armageddon in 30 months.

The sign of a Prophet is when the Word is proved True with the Passage of TIME. To have a Public record of an exact Future Time is risky for anyone, but what actually did happened exactly 30 months later?

History shows The Camp David Accord, a Treaty between Israel and Egypt, was signed. Negotiations broke down on the 12th Day, but an unexpected breakthrough appeared on the 13th Day.

This was the 1st Peace Treaty Israel made with an Arab State since it was recreated from the Bible after an absence of some 2800 years. By any narrow or stretch of  imagination, the signing of that Treaty in 1979 does symbolize the Universal Brotherhood of Man is achievable with Determination and Good Will.

The earlier September 13 article records, “He came to town for the Republican National Convention and will stay until the election in November to do God’s bidding: To tell the world, from Kansas City, this country has been found wanting and its days are numbered […] He gestured toward a gleaming church dome. “The gold dome is the symbol of Babylon,” he said.”…………….He wanted to bring to the Public’s attention an “idea being put out subtly and deceptively” by the government that we have to get prepared for a war with Russia.”  .”

“this country has been found wanting and its days are numbered” are the first two parts of the three part Writing On The Wall recorded in Daniel 5 during the Captivity of Babylon some 2600 years ago.

It was not until 9/11, and 7 years later, with the Global Financial Meltdown-Economic Pearl Harbour-Tsunami in the Fall of 2008, the whole world was able to see the Writing on the Wall for the 1st Time at the same Time. The world has ignored it, still thinking it is a money-things problem, when it is a Spiritual problem.

Along the Timeline, this also happened in 1979, just before the signing of the Camp David Accord  long after the 1976 KANSAS CITY TIMES record.

This is exactly the Destruction this world is Witness to unfolding in the Middle East TODAY, 40 years later. The conflict in Syria has the objective of reversing the 1979 Iranian Revolution.

On the 1st part, Donald Trump is essentially campaigning on the idea the Days of the US are numbered if he is not elected President. He uses other words, but he is Trumpeting the same General Idea from that 1976 newspaper report.

What about the “He wanted to bring to the Public’s attention an “idea being put out subtly and deceptively” by the government that we have to get prepared for a war with Russia.”  part of the 1976 record?

Getting back to the ALL SOULS DAY record, as if to confirm the 1976 Prophecy, the made for TV movie ‘THE DAY AFTER’ Kansas City was destroyed in a Nuclear Holocaust appeared November 20, 1983. Up to that point, the Official government line was ducking under a table would save you in a Nuclear War.

I speculate I was the only human on earth, including the two KANSAS CITY TIMES reporters, watching that movie in November 1983, to take NOTE of this extremely unusual co-incidence or design?

At the end, the 1983 movie pauses at the very same picture frame THE KANSAS CITY TIMES used in the ALL SOULS DAY record 7 years earlier you see upstream.

The following video clip shows what will happen if Russia and the US do escalate the current conflict that is unfolding with every new Revelation Day by Day, as the beat of the War Drums increase in tension and tempo.

THE DAY AFTER will be TOO LATE.

The US is CURRENTLY bombing 4 Sovereign Middle East Nations without the US Congress passing a formal Declaration of War, or with the Authority of the UN Security Council. That makes those current US Military actions in violation of International Law, and is not even on the table for discussion in the pathetic sham of a US Election.

It is not a co-incidence 3 of those 4 Nations the US is bombing TODAY, Iraq, Libya and Syria, were on the list of 7 ME Nations General Wesley Clark, former NATO Commander, revealed the US was planning for regimes change within months of 9/11, ten years before the Arab Spring of 2011

This entry to this Blog Today, is the continuation of that Appeal of Conviction!