I start my Day on the computer reading The Jerusalem Post, Haaretz, The Washington Post, and then move on to many other different on line news sites.

Why do I start with Israeli news organizations? Because that’s where Armageddon is located and starts. Armageddon was derived from Har Megiddo located in Palestine during the occupation of Judea and Samaria 2000 years ago. Israel had ceased to exist as a kingdom some 800 years earlier.

Har Megiddo-Armageddon still exists as a physical place, but is now located in temporal Israel recreated from the Bible after an absence of some 2800 years.

It should be a wonder to thinking people everywhere, how it came to be, that after 2000 years of a bloody human history of Wars and Conquest, Nations and Empires, Invasions and Resistance, the most explosive and divisive issue confronting humanity Today, is still over the occupation of Judea and Samaria in Palestine?

The following Editorial from Israel’s Haaretz newspaper tells us the reality of what is developing in Israel even though the Israel government and the settler supporters cannot or will not recognize it, and if they do, it’s because they naturally consider Jews to be superior to Palestinians, like the Nazis considered themselves superior to Jews in another place and Time

In the real world, outside the realm of speechmaking, Netanyahu is only ready to hold empty and aimless talks with the Palestinians.

Prime Minister Benjamin Netanyahu presented his current political vision to the Knesset Foreign Affairs and Defense Committee this week. While saying that that he does not want a binational state, Netanyahu stressed that Israel “must control the entire area for the foreseeable future.” He explained that he was prepared to divide the land but “the other side is unwilling,” and that the Middle East is subject to Islamic religious influences that preclude any possibility for peace.

On the face of it, this position does not seem extremist. It’s accepted by most Israeli Jews, according to multiple surveys that have been conducted over the last 15 years, ever since the Camp David summit. Most people support the idea of a Palestinian state alongside Israel, but believe that it is not practical since there is “no partner” on the other side. The same majority, including Netanyahu, opposes the notion of a binational state with equal rights for all its citizens, Jews and Palestinians alike.

Netanyahu has cleaved to this line for his entire tenure: Verbal consent to dividing the land – which distinguishes him from the extreme right and from settler leaders –

while in practice adopting policies that thwart the realization of such partitioning. He has consistently refused to talk about future borders with the Palestinians, demanding that they recognize Israel as “a Jewish state,” developing and expanding settlements across the West Bank and presenting Palestinian President Mahmoud Abbas as an enemy and instigator to violence.

In the real world, outside the realm of speechmaking, Netanyahu is only ready to hold empty and aimless talks with the Palestinians, or to discuss “small steps to reduce tension,” without relinquishing any control on the ground.

His words this week acknowledged Israel’s total domination over the territories, discarding the dual pretense of a “temporary war-like situation,” which the state has regularly presented to the High Court of Justice for decades, and the pretense of a Palestinian Authority supposedly enjoying autonomy in managing Palestinian affairs, as Israel likes to present things.

Netanyahu’s opposition to a binational state leads to a clear conclusion: As long as “Israel’s 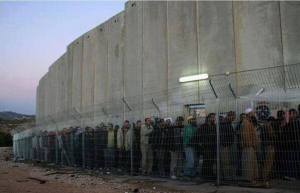 control of the area” continues, millions of Palestinians in the territories will remain in the inferior status of subjects devoid of civil rights. Their settler neighbors, meanwhile, enjoy such rights unhampered.

The regime described in Netanyahu’s vision has a name – it’s called apartheid. There is no other term for two populations living in the same area, one with political rights and the other under perennial military occupation. No security argument or warnings about the effects of Islam can whitewash the implications of this vision. Netanyahu’s words should shock anyone who is concerned about the justice of Israel’s cause and the country’s future. Concerned people should unite and form a national salvation front that will work to replace this government.