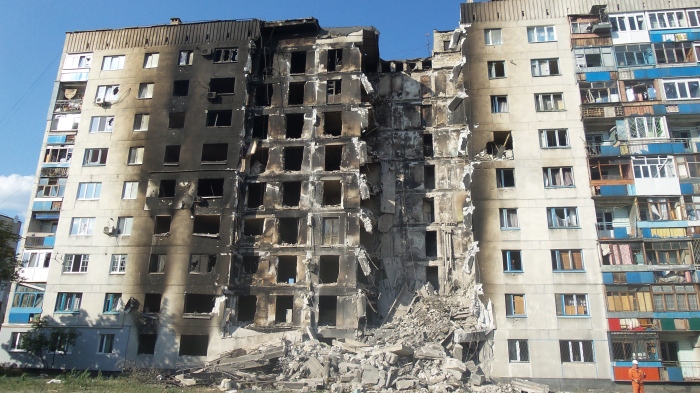 I am pleased to re-post this article that appeared in Pravda Today, and in other on line news outlets, written by someone I have known for many years. We both arrived at the same conclusion independently. It is the US, with it’s aggressive anti-Russian attitude, that has precipitated this crisis to further it’s Babylonian Imperial hegemonic control of this world and it’s resources. Since the US took over the Imperial Mantle from England after WWII, it has attacked and invaded only poor, 3rd world countries, Korea, Vietnam, Grenada, Iraq, Afghanistan, Pakistan, Yemen and other impoverished places. What it has done covertly via the CIA, Navy Seals or other groups operating in secret remains to be exposed. In it’s major invasions, Vietnam, Iraq and Afghanistan, the US wanted out in a hurry with it’s tail between it’s legs. Perhaps this is an example of Divine Justice? Few remember it was the US in 2002 that unilaterally abrogated the 1st Strategic Arms Limitation Treaty (SALT I) signed in 1969 with the Soviet Union. That Treaty banned the deployment of anti-missile missiles and a new arms race. The US then proceeded to deploy those anti-missile missiles in a ring around Russia in the former Warsaw Pact Countries. This US action would have made US intentions suspect in Russia for legitimate reasons. The US engineered putsch/Coup D’Etat in Ukraine is only the latest aggressive action by the US to contain Russia, the last remaining obstacle to US world domination and hegemony. It’s all about the money and power.

Ukrainian crisis: We didn’t get here by accident

By Recalcitrant Hippy The Ukraine crisis started on Nov. 21, 2013; today we have a cease fire agreement. President Viktor Yanukovych had refused to sign a free-trade agreement with the European Union which included the same austerity measures that have nearly destroyed Greece. It was not in Ukraine’s best interest and Moscow was proposing a deal that was. Given the historic relationship between the two countries, the decision to choose Moscow’s deal seems obvious. Thousands, who had hoped to join Europe, descended on Kiev’s Independence Square. It was a peaceful and spontaneous protest dubbed the EuroMaidan, that went on for several days. There were no altercations. They sang nationalistic songs chanting that Ukraine was really European. Kiev received a much needed financial bailout from Russia totaling 15 billion US dollars. Moscow wrote off billions of dollars of unpaid gas debt. This story should have died at the end of that first news cycle but there was a subtext already in play.

As soon as the bailout was announced, senators John McCain and Lindsey Graham denounced Yanukovych for denying the democratic rights of the protesters to join Europe? They said it was a Russian plan to reclaim the country and start rebuilding the USSR? They called for the people to rise up against the government and told them the American people would support them. The Right Sector and the Svoboda, recognized neo-nazi terrorist groups according to both American and European watch lists, appeared on the Maidan in number. They were masked, carrying Molotov cocktails, axes and guns. Under Yanukovych’s orders, the

police showed heroic restraint night after night. Their shields were repeatedly whipped by chains. Petrol bombs thrown behind their lines sent many to hospital with severe burns. Officers who were isolated by the mob were brutally beaten. McCain exploded when people

suggested that these were rioters. He championed them as fighting for democracy against despotic regime; although Ukraine was actually a democracy and elections would have happened in less than 2 years. Yanukovych could easily have been replaced by someone more favourable to the European Alliance. But something else was at stake. McCain turned up on the Maidan, cheering on the violence. He made contact with the leadership of Right Sector and the other neo-nazi groups involved. He told them America would help them in their cause. Victoria Nuland, American Deputy Secretary of State for Europe, turned up in Kiev with cookies and words of support for the rioters. Both of their actions were a direct violation of international law and the conventions of diplomacy. Before leaving the country, Nuland was caught in a telephone conversation with the American Ambassador to the Ukraine. They were discussing the State Departments choice of Arseni Yatzinuk for Prime Minister in the interim government. Yanukovych was still in Kiev, still president and he was negotiating with Right Sector to restore order. Even the United States refuses to recognize regimes that take power in this manner. If two Soviet era officials, had turned up at a Martin Luther King rally to offer him Moscow’s support; well… it’s easy to imagine what the Americans would have thought about that; most likely the same thoughts Ukrainians and Russians had while watching it actually happening in their backyard, and with neo-nazis.

After Snipers assassinated several people including police on the Maidan, Yanukovych struck a power sharing deal with Right Sector to end the violence. That night he learned that they were coming to kill him instead of keeping their word. He fled the country. In unprecedented scenes of violence, the neo-nazi groups seized the parliament, physically beating and ejecting members from the house. Many officials were terrorized, threatened and forced to sign false statements. The police department was disbanded and some of them were assassinated. The United States pronounced the Right Sector under Arseni Yatzinuk, the legitimate government of Ukraine. No investigations were ever carried out. Fast forward and Petro Poroshenko has become President. He declares that Russian is no longer an official language, despite a third of the population, mostly in the Donbass, all being Russian speaking. Right after the coup, the neo-nazi groups had sent militia into the Donbass destroying vital infra structure, dragging people from their homes, threatening and terrorizing the population. The people resisted and conflicts began to turn ugly. People were dying. Armoured vehicles from the Russian military base in Sevastopol blocked all of the entrances to the city to protect it, after local authorities refused to recognize the new Ukrainian government and appointed a new head of the city. Attempts at attacking the city were pitiful and fruitless. Kiev offered to hold national elections so that the Donbass could elect its own representatives to his government and he restored the status of the Russian language. He had promised to go to the Donbass but he never went. The people felt betrayed and decided to hold a referendum before the elections. The Crimea decided to ask if they could join Russia. The rest of the region voted to stay in Ukraine and resolve the situation by negotiating a Federation within the country. Russia agreed to repatriate Crimea. Much of the population are Russian and it has been the site of one of the most important ports for the Russian navy since 1783. Ah… a prize worthy of deception and corruption to attain, perhaps? Those Ukrainians remaining, from the old Ukrainian army, at the time the regions began defending their territory, were unceremoniously disarmed and escorted out of the region. Anyone who wished to leave with all of their belongings was allowed to do so and many did, some to Russia, some to Ukraine. A humiliating defeat for Kiev and its supporters. Then they began bombing the Donbass and blaming Russia for invading Ukraine. The lies and the carnage have gone on for 14 months. The Americans continue to spearhead rhetoric without any evidence to support their allegations and without contributing towards a solution in any meaningful way. The Russians have been coy but they certainly have some involvement, the stakes are too high not to. The Europeans bear the brunt of the sanctions. They are also the ones who live under constant threat of another war on their soil. The Americans have so far given the Ukrainians barely 5 million dollars worth of flack jackets, first aid kits and ration packs. Now that a deal is at hand Congress suddenly approves 3 billion dollars in military aid. The US has a long history of both regime change and of torpedoing peace deals. The Normandy 4 have accomplished the near-impossible and we have a formula that might help bring an end to this conflict. The Americans have no stake in this fight; so why am I waiting to see what they will do? Secretary John Kerry said that the US may roll back sanctions if the agreement is enacted, no mention of curbing arms shipments though. There are many things the Americans say they may do. I was amazed at how little information remains on the search engines. I had to use stories that I wrote at the time for some of these details. All that is left is the vilainization of Vladimir Putin and the ever more vitriolic rhetoric. Never forget what happened people; confronting the truth of how this all began is where the key to a lasting solution is.

Gord Cowie, 57, is the Recalcitrant Hippy in Montreal, Quebec. He has traveled to India, parts of East Africa, Bangladesh and the Caribbean volunteering to help orphaned children and single mothers survive in their own country. He has internationally adopted children. Self employed and doing residential construction and renovations for the last 20 years, Gord reads online news for about 4 hours every day and comments frequently. His diverse hobbies include history, temporal physics, cosmology and writing.       The Kansas City Times published the marker of TIME below. If you expand the image, you will read during the American celebrations of the Revolutionary Spirit of ’76, I was warning about the “idea being put out subtly and deceptively” inciting for war with Russia. It is TIME! Gentlemen!