It is ironic the story of the Man named Job recorded in the Bible some 3500 years ago, is a word taking on so much more significance these Days. Many feel trapped in a Job they hate, or doesn’t pay enough to meet the cost of basic necessities to live, no matter how honest or hard working they are. More People are struggling to meet the rising costs just to subsist in the Free World.

Job the Man would have been viewed as part of the 1% Elite when he lived. He was fair and Just with his Servants, and helped those less fortunate than himself.

He had 7 sons and 3 daughters as well as seven thousand sheep, three thousand camels, five hundred yoke of cattle, five hundred she- donkeys, and very much production; and the man was greater than all the children of the East.

Every Day, Job would pray to God, “Perhaps my sons have sinned and blasphemed God in their hearts.

Now the day came about, and the angels of God came to stand beside the Lord, and the Adversary, too, came among them. The Lord said to the Adversary, “Where are you coming from?” And the Adversary answered the Lord and said, “From going to and fro on the earth and from walking up and down in it.”

When I think on those words of the Adversary (Adversary in the Jewish OT=Devil in the Christian NT) Today, not much has changed at all. The People still go to and fro with every new fad, style or rumour, and the People are either up or down in the extremes, and every place in between. This is not dissimilar to Christ’s recognition of those same Realities 1500 years later by these words, to this very Day.

And the Lord said,  To what then shall I compare the men of this generation? and to what are they like?
They are like children sitting in the marketplace, and calling one to another, and saying, We have piped unto you, and you have not danced; (up) we have mourned to you, and you have not wept. (down)
For John the Baptist came neither eating bread nor drinking wine; and you say, (Jewish Religious Leadership) He has a devil.
The Son of man is come eating and drinking; and you say, (Jewish Religious Leadership) Behold a gluttonous man, and a wine bibber, (liked his wine) a friend of publicans and sinners!
But wisdom is justified of all her children.

Getting to Job, the story continues,

Now the Lord said to the Adversary, “Have you paid attention to My servant Job? For there is none like him on earth, a sincere and upright man, God-fearing and shunning evil.” And the Adversary answered the Lord and said, “Does Job fear God for nothing?

Haven’t You made a hedge around him, his household, and all that he has on all sides? You have blessed the work of his hands, and his livestock has spread out in the land. But now, stretch forth Your hand and touch all that he has, will he not blaspheme You to Your face?”

And the LORD said to Satan, Behold, all that he has is in your power; but don’t touch him. So Satan went forth from the presence of the LORD.

As he was praying for his children, a servant rushes in and says,

The band of thieves Job was able to understand, even with no Insurance or 911 to call, but 2 Natural Disasters as well? The man was totally wiped out, psyched out, frustrated, and tormented like few humans have to go through, with the exception of War doing the same thing to many more people at the same Time. Not many humans would have the strength of character or Faith in the Eternal to react as Job did,

Then Job stood up, and rent his robe and tore his hair; then he fell to the ground and prostrated himself. And he said, “From my mother’s womb, I emerged naked, and I will return there naked. The Lord gave and the Lord took; may the name of the Lord be blessed.” Despite all this, Job did not sin, neither did he ascribe unseemliness to God.

It’s what we say and do when we have our teeth between the Beginning and the End, that determines if we leave a Legacy for Posterity, or if we just turn to dust blowin in the wind.

There was another Day when the Sons of God came to present themselves before the Lord and Satan came among them. They have the same exchange as cited above, and the Lord says to the Adversary,

Have you considered my servant Job, that there is none like him in the earth, a perfect and an upright man, one that fears God, and avoids evil? and still he holds fast his integrity, although you moved me against him, to destroy him without cause.
And Satan answered the LORD, and said, Skin for skin, yea, all that a man has will he give for his life.
But put forth your hand now, and touch his bone and his flesh, and he will curse you to your face.
And the LORD said to Satan, Behold, he is in your hand; but save his life.
So Satan went forth from the presence of the LORD, and smote Job with sore boils from the sole of his foot unto his crown.

Here the Lord consents to the Adversary/Satan being both Tormentor and Saviour of Job.

Now Job was not only broke and busted, in constant pain, but he was also physically repulsive to look at if anyone has seen just 1 boil, never mind boils from head to toe.

Then his wife said to him, “Do you still maintain your sincerity? Blaspheme God and die!”  And he said to her, “You talk as one of the disgraceful women talks. Shall we also accept the good from God, and not accept the evil?” Despite all this, Job did not sin with his lips. 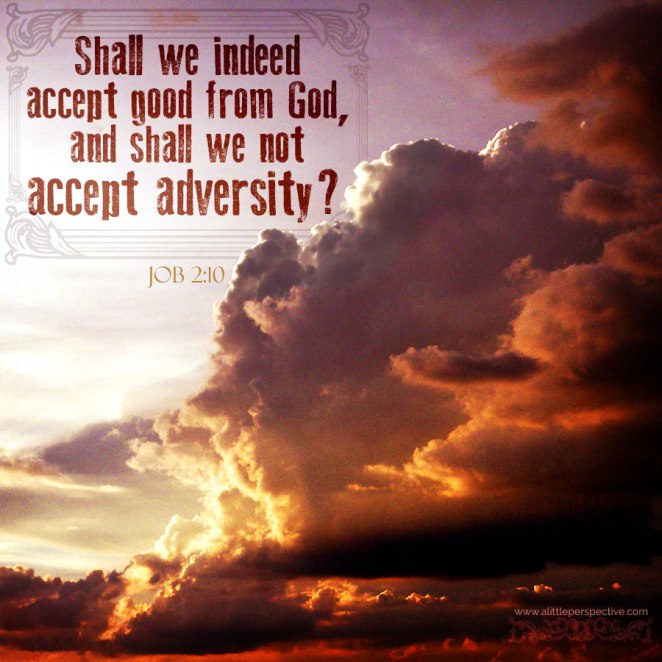 Job had friends who heard of his misery and came to comfort him. Seeing he was so tormented, they sat in silence for a week before speaking and then they didn’t comfort him at all, making him feel worse.

That discourse between Job and his friends is too long to place here, discussing the many Mysteries of God People still seek to understand Today, but in the end, after Job endured the trials and tribulation, it is written,

Now the Lord blessed Job’s end more than his beginning, and he had fourteen thousand flocks and six thousand camels and a thousand yoke of cattle and a thousand she-donkeys. And he had fourteen sons and three daughters. […] Nowhere in the land were women as beautiful as Job’s daughters to be found, and their father gave them an inheritance among their brothers. […] Now Job lived thereafter one hundred and forty years, and he saw his sons and his sons’ sons for four generations.

Those who are genuinely interested can read the discourse between Job and his friends following the links below.

While Job does not have a separate Book or Chapter in the Islamic Quran,

he is mentioned in several places with one or two lines.

In our 30 second sound byte Society, it does take the Patience of Job as in a Job, to question The Eternal and wait Patiently for the answer with an open mind and heart.